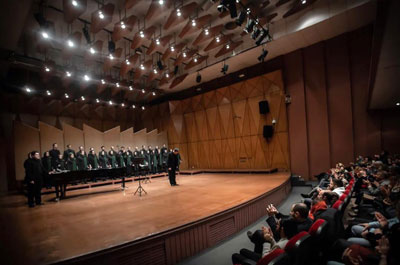 Posted at 11:11h in Choir Performances by Istgah Musical 0 Comments

THE TONE OF THE CHORUS

Formation of a chorus and singing in a choir is not a common phenomenon in the communities of Iranian arts. Although the first Iranian choir was formed more than 70 years ago, there are not many professional choirs in Tehran and other cities of Iran. With all the obstacles in the way, Istgah orchestra has been able to establish its choir in 2017 with 45 members. This group has been able to introduce itself as a dynamic choir by executing successful concerts and has been flourishing in the community of Iranian arts. Moreover, it attracted the approval of critics by performing repertoires from famous classical music pieces such as works of Beethoven, Mozart and Haydn.